I’ve had this idea in my head for ages to cover some of my sketchbooks and albums in some of the fabric I’ve been collecting for years !! I never seem to have time to do it but as you know I’ve had a lot of that the last two days. 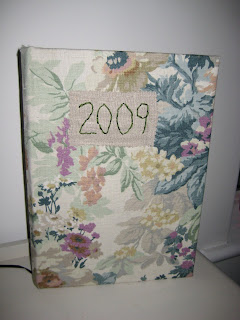 This isn’t just any old diary. My plan is to keep a diary for “An Teach Ban” (The White House) i.e. my cottage.

Years ago a friend of mine worked in a shop where they kept a diary. At the time I thought it was a bit odd but now I see the quirky side of it. In it they recorded things about the weather, anything big in the news and anything relating to marketing/sales i.e. holidays so I’ve decided to do something similar.

I’m going to record mostly things relating to my garden – as I plan to get my vegetable garden built this year.

Hopefully there will be something about chickens and eggs …. something else I plan to get in the New Year.

But the idea is basically to have a diary of An Teach Ban and all that happens here in 2009. Let’s hope it’s full of good things.