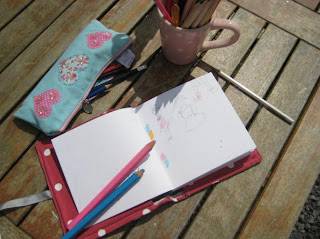 I was away for a few days but didn’t want to broadcast it as there have been a few break ins in the area and you can never be too careful.  Not that there was anything to take, unless the person doing the burglaries has a passion for sewing and crafts :o)

Whilst I’ve been away I’ve been getting lots of ideas and inspiration and yesterday spent some time in the garden jotting down all my ideas.

My big news is that I will be appearing in Ireland’s House & Home magazine next month.  They are doing a little feature on the deck chair I re-covered.  Super excited about that :o)

I’ve been making some pencil cases too and hope to post a tutorial later in the week.

I must get on as I have my first sewing workshop later and have to get things ready for that.

Hope you’re all having a fun filled Tuesday!