I’m not really a mug fan.
In fact when I lived in New York it drove my roomate nuts as I only every wanted to have brunch in Cafe Mogador as they seemed to be the only ones in the East Village that actually served coffee in a cup!!
I digress.
However, when I saw this pic 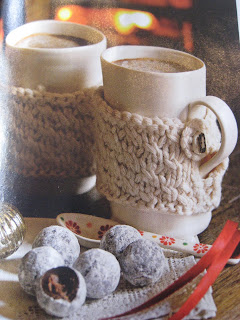 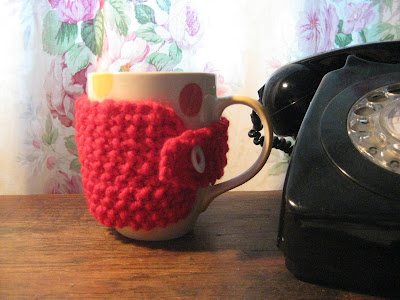 I didn’t have any pattern, I just winged it.
I used chunky wool and cast on 13 stitches and knit 1, purl 1 until I ‘thought’ it was long enough to wrap round the mug (until it measured approx.  5inches).  Then at the next row I cast off 4 stitches at the beginning and continued k1,p1 across (9 stitches)
Then I cast off an additional 4 stitches at the beginning of the next row, leaving 5 stitches and continued k1, p1 until I had a long enough bit to button through the handle.
Honestly it was so much easier than it reads!
Previous Post: « Quick Tidy up
Next Post: Signs of Spring »

This website uses cookies to improve your experience while you navigate through the website. Out of these, the cookies that are categorized as necessary are stored on your browser as they are essential for the working of basic functionalities of the website. We also use third-party cookies that help us analyze and understand how you use this website. These cookies will be stored in your browser only with your consent. You also have the option to opt-out of these cookies. But opting out of some of these cookies may affect your browsing experience.
Necessary Always Enabled

Any cookies that may not be particularly necessary for the website to function and is used specifically to collect user personal data via analytics, ads, other embedded contents are termed as non-necessary cookies. It is mandatory to procure user consent prior to running these cookies on your website.