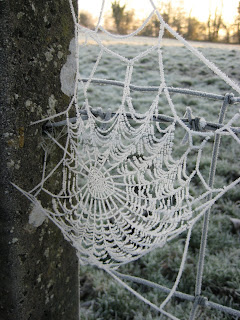 I was due to be in hopsital at 2.00 pm today for a sinus op tomorrow.

It’s now almost 3pm and the hospital is over an hour drive away.

I called at 9.30 … as requested in the letter I received.

I was told to wait.

I waited and called again.

I was told to wait.

Waiting involves time and time equals worrying. Worrying about what lies ahead.

Waiting and worrying … not a good combination.

So I decided to stop waiting and start doing!

So I put together the tutorial below for my tin can cards. That, and read some magazines, watched morning telly, did some washing and ironing, caught up on some filing, started a new project for 2009 (will share that later) and am now catching up on emails that I’ve been filing away for a rainy day.

I wonder how long it took to make the cob web in the pic above?