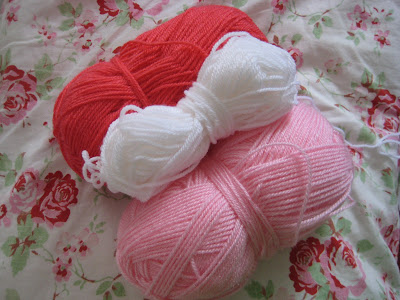 Like most other crafty peeps out there I’m tring to use up what I’ve got before I buy anything else.  I can’t say I’m sticking to it rigidly but I am trying!

I’ve been wanting to make a tea cosy for a while (not that I even drink tea!) and whilst sorting out my wool stash these fell out onto the florally cushion above and I thought voila!  Love those colours together.  I originally planned to do a plain cosy with a big flower on it but then veered off and decided on a cup on one side and a cup cake on the other. 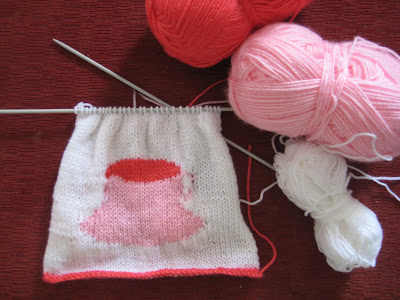 After spending a bit of time (way too long) in excel I came up with some charts. Here’s the tea cup, It’s not the greatest but not bad (if I say so myself) for a frist timer.  I think I’ll do two stitches for the cup handle next time (yes I’m already thinking of doing more and I’ve not even finished this one!) as you can barely see it. 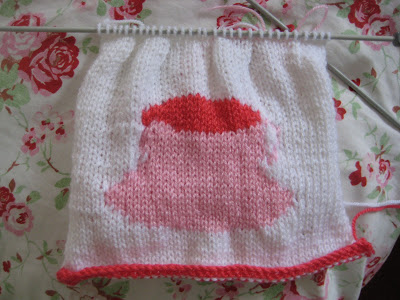 I’ve started on the cupcake on the other side now so hopefully I’ll have a finished product to show you later in the week!
Anyone else knitting at the mo?  I’ve been tempted into charts by cross stitch magazine – I keep seeing it on the shelf in Tesco and thinking “wow that’s pretty but I’m sure I could do that in excel”.  So, despite a to do list a mile long I spent a few hours in excel working out some charts.  Watch this space for more designs :O)
Previous Post: « Heaven is …
Next Post: Alternative pots »