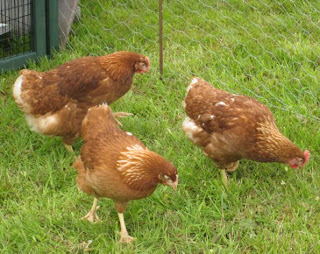 Did you see the Private Life of Chickens with Jimmy Doherty the other night?  I loved it.  God, between that and my fascination with Lambing Live, the Edible Garden and Gardeners World I seem to be turning into a right country bumpkin!!  I even got this chicken tea set for my birthday :o) 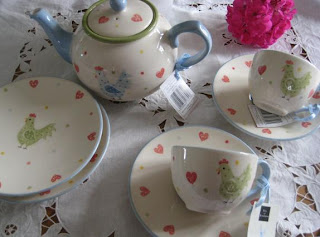 It was a shame the programme didn’t cover more on actually looking after chickens which I think would have been useful.   Judging by the amount of questions I get I think a short series on chicken keeping would go down a storm!

Speaking of which I’ve decided to put all your questions to me in one post and try and answer them as best I can.

Before I start, have a look at this whopper of an egg I got the other morning – the joy of hen keeping :o) 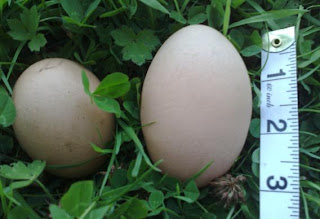 Before I start with your questions I would suggest you think seriously before keeping chooks.  Why?  Because despite them being very low maintenance they are quite a tie in the sense that you need to be (or someone does) home to let them out in the morning and lock them in every evening and also think about when you go away. I’m lucky as my mum and dad live nearby but it’s something to consider.  Also don’t get too many.  I live on my own and have 21 eggs a week with my three !!!  Two chooks would have been plenty.

When you buy them and bring them home first it will take a couple of weeks for them to settle in before they start laying.  My poor girls wouldn’t even come out of the coop for the first few days, now I can’t keep them in it !!

So here goes with your questions …

Where did you buy your chicken coop?

I bought it off e-bay from this company.  It was super easy to assemble and I did it on my own. It’s also great to clean out.  The only downside is that it requires two people to move it.  I’m thinking of adding a base to it with wheels.    I also think it’s too small to keep chooks in all day so I have sectioned off a large part of my garden for them with chicken wire (this works out quite expensive).

How many eggs do you get a day?

I get three, that’s one egg per day per hen.  During the winter this can be less.  Apparently they need so many hours of daylight in order to produce eggs.  TV would lead you to believe that the eggs are there ready for breakfast but that’s not the case (well not with my girls).  Mine like to be let out of the coop first and have their breakfast before they provide me with mine :o)
Do you need a cockerel?

No.  As my Dad, in between roars of laughter, highlighted to me.   The cockerel is only needed to fertilise the egg as with us ladies :o)

How do you deter foxes?

I don’t.  I think I’ve just been lucky.  However, a badger did kill one of my girls in January.  There are lots of sites and books with advice on deterring foxes with suggestions such as peeing around the perimeter of  where the chickens are kept.  No I haven’t done this, despite seeing several foxes in the area.  My chickens are just outside my kitchen window so maybe I deter the foxes??

What do you feed the chickens/how often?

I feed mine with layers pellets mixed with whole barley oats.  I have one of those self feeders but before I had that I gave them a few handfuls in the morning and late afternoon.  I also give them any scraps (not that there’s many) from the kitchen.  NEVER feed chickens meat though.  Luckily I don’t eat it, apart from sausages & bacon (a whole other blog post) which there are never leftovers from :o)  My girls love peas and sweetcorn so I give it to them as treats.   I also give them lots of fresh water, it’s amazing how much they drink.
What type do you have?

I have rhode island reds.  The reason I got them is that they are good ‘layers’.
How do they get on with your cats?

Great.  Ruby often sleeps in or on the coup during the day and they are fine with her.  However, they don’t like Randy and he doesn’t really like them either.  There’s never been a major fight they just growl or cluck at eachother :o)

How often do you need to clean out the coop?

I give it a major clean every few weeks i.e. hose it down completley & disinfect it in the morning and leave it to dry during the day and lay fresh hay in the nesting box.  It’s important to do this as mites can get in the crevices of the wood.  I try to clean out the droppings ever few days too as it can get on the eggs.  If it does do not rinse them under the tap as eggs are porous and the droppings can make you very ill.  Instead wipe them with a damp piece of kitchen roll.

I think that’s everything, if you think of anything else just leave a comment :o)

The best thing about keeping chooks though is all the eggs.    When I have a bit of a glut I make my infamous fritatta .. 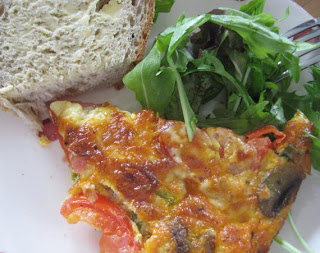 Fry some bacon or chorizo (my fav) in a little olive oil (sometimes I use oil from a jar of sundried tomatoes) and then add the egg mix.
Transfer to the oven, 180 degrees and bake until golden approx 35 mins
Serve with rocket and crusty bread – deeelish!

I have several variants on this … sometimes I make it greek style and add olives, feta cheese and rosemary.  Italian version is with mozarella and olives or just plain eggs with lots of grated cheddar cheese is good too.